The winter housing market around Michigan is showing several signs of slowing, providing a much-needed break for potential buyers who have been waiting to jump into the market. With a strong economy and low unemployment, the seasonal housing dip is more about a rebalancing act of the market than a sign of a downturn.

According to a report published by the Grand Rapids Association of REALTORS® (GRAR), Grand Rapids continues to favor sellers in today’s real estate market, as they are receiving 96% of their listing price. However, after examining the numbers, the area currently seems to have caught hold of the seasonal ‘holiday blues’. With the total number of homes still available for this month totaling 1,824, inventory is down 8.1% compared to the previous month. November property sales totaled 858, which fell 18.7% from the previous month. The average for sale price of homes in the Greater Grand Rapids Area for November was $329,000, down 2.1% from $336,000 last month.

Have no fear, this trend should not last long. Real Estate professionals are saying that this winter blues will only continue through January and maybe February. So, just as the weather starts to warm, so does Grand Rapids and the rest of Michigan’s real estate market.

Looking further, a new report has named Grand Rapids, Michigan as one of the top 10 housing markets nationwide that are “poised for takeoff” in 2019, according to Trulia. After topping last year’s list, Grand Rapids came in second this year, with employment growth and low vacancy rates contributing to its strong performance. Researchers also say Grand Rapids is a market with a good starter-home affordability and a large share of the adult population under the age of 35, which is the age of many first-time home buyers. This is great news for west Michigan as we enter the new year knowing that there is a lot of optimism for future market growth.

Moving over to the east side of the state, the number of homes sold in southeastern Michigan decreased 5.7% compared to the same month last year, while the median sale price continued to inch higher by 5.5% to $169,900. The Ann Arbor housing market saw a total of 290 new residential listings in November, which is up about 2% compared to last November. However, total residential sales compared to the same time period last year has fell 10.3%, reaching a total of 347 sales in November. Additionally, the average list price for Ann Arbor in November was $328,035, which accounted for a 9.2% increase compared to last year. According to RealComp, its showing that the tri-county metro Detroit area could be nearing a peak in the residential real estate market. The report also mentioned Oakland County felt the most pain, with residential homes sales down 8.9% to 1,399 last month, compared with 1,529 in September 2017. The median sale price of homes in Oakland County rose 1.8%, to $235,000 and the number of listings fell 13.6%, which now total 5,209.

Does this mean that selling in the winter months should be avoided? Absolutely not…it’s just the opposite! Some houses actually show better during the holidays because of the lights, decorations and smells. Furthermore, there will be less competition because there are fewer homes on the market and buyers are going to be more serious. Waiting until spring rolls around will mean more houses to choose from, but the number of buyers will also go up, thus increasing multiple offer situations. And finally, interest rates are in an upward trend. Waiting may cost you more. 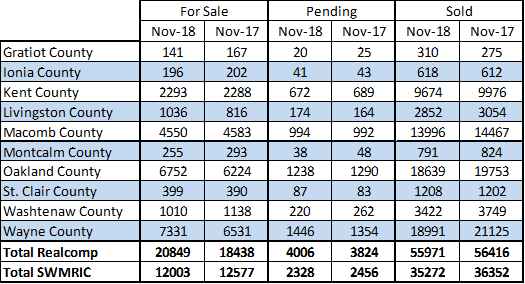 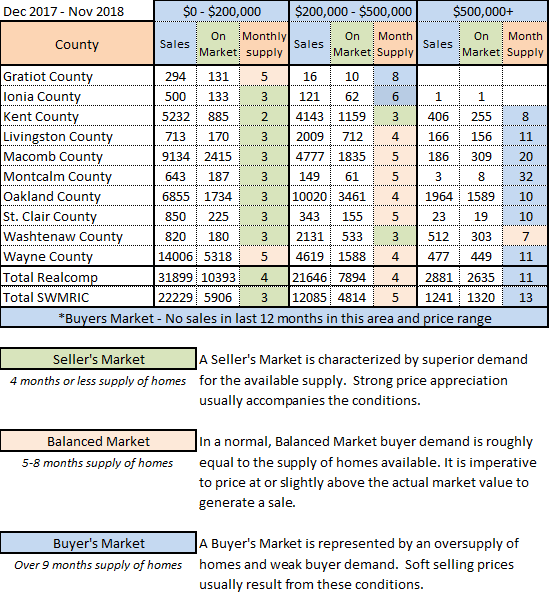 Your real estate inquiries are important to us, so please expect a prompt reply.